Rhonda and I have always loved to sing Christmas Carols, so when we received an invitation from Word Made Flesh ministries to join them singing Christmas Carols in the brothels of the area known as 12 de Octubre, our decision was easy.  The zone known is about three miles from our house and is one of the most crowded areas of El Alto, filled with street vendors selling clothes, toys, food, bread, pots and pans and anything else you can think up.  There is no sense of space, people bump and push past at every turn and so, it is also an area of high crime.

In and around this area are the brothels, non distinct buildings without signs but with red doors that men literally pour in and out of.  Inside the door a small hallway leads to a large very dark room where  loud music pulses and grinds, and drinks are served.  Surrounding this central room are doors to small bedrooms where men file in lines, peering inside open rooms to take a look and see if they are interested in what’s inside.

Yes, prostitution is illegal in Bolivia, and yet this is the thriving scene for brothel after brothel, six brothels within a three block area.  On one corner a police bus sits-in case there are any major disturbances, but the brothels function uninterrupted.

In 2005, there were 1,295 known prostitutes in my city of El Alto and now it is believed that there are at least 3,000 and they are paid $3 per encounter, 10 encounters per night.  78% did not finish school and cannot read or write—which does not mean that they did not want to finish school or that they could not finish school.  Here in Bolivia, it is not uncommon for families to put children to work at very early ages in order that they eat.  90% of these women have a history of sexual abuse prior to becoming a prostitute.  Many of the women have had 3 to 4 abortions and some as many as 10.

And there we were!  Singing Christmas carols in the middle of the brothel, fourteen of us on our team-all dressed in Santa hats trying to show the love of Christ, trying to show the smallest light in the midst of the darkness.  And in one brothel, one crowded brothel with men pushing in lines, all of a sudden the men stopped!  Their feet stopped shuffling, no one called for a drink, no one tried to make a deal, no one spoke.  There was no music in the background, and the only sound was our team singing Noche de Paz, Silent Night.  It was amazing!  I would love to say this is what happened in every brothel, but I can’t.  It was only in this one.  I would love to say that someone came to the Lord, understood what we were doing and saw the love of Christ, but I can’t.  All I can say is that something miraculous happened.  Everyone-everyone, in this brothel stopped, stood still and listened.  And at the end of the song-we left.

But don’t think that all we did was enter a brothel to sing.  Let’s first understand the miracle that existed in the fact that we were even allowed to enter each and every brothel for the purpose of singing Christmas carols.  That miracle is thanks to the amazing cultivation of relationships by Andy and Andrea Baker, the leaders of this ministry, Word Made Flesh that reaches out to these prostitutes.  They have spent twelve years in these trenches snatching souls from hell.  And the bartenders and brothel workers have such respect for the Bakers that when Andy enters and tells them to turn off the music so that his team can sing—they do it!  Tell me that is not the power and favor of God!

While most of us sang, Andy and others that regularly work in the ministry went to each door of the brothel to visit the ladies, giving them a Christmas cake and sharing that Jesus loves them.  Sometimes the ladies asked how much the cake cost, and they were surprised when they were told it was free, just a little example of grace and love to these ladies who daily live under judgment and condemnation.  But as Andy told us before we left, “Who are we to cast the first stone?” 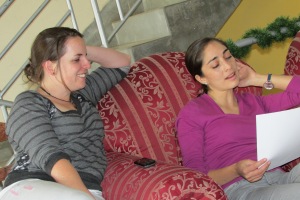 Getting the songs right

It is the heart of this ministry to show the love of God.  It is through this kind of demonstration that the ministry is able to help some of these ladies leave the brothels and begin a new life.  The ministry helps those who leave to find a new life, teaching them about Christ and helping find a new job, training some to make products such as those you can buy at www.sutisana.com  (Take a look at their products and support their efforts to find a new life in Christ).

And please pray for Andy and Andrea Baker and those at the ministry of Word Made Flesh.  They are all warriors for Jesus.  (The pictures accompanying this post are those of our practice and prayer prior to leaving for the brothels.  We had two teams.  Our team consisted of fourteen people, four men and ten women.  The other team was even larger.)

What a great Christmas it has been for me, what a gift the Bakers and Word Made Flesh gave me.  On Friday night, I saw Jesus.  He was wearing a Santa hat and singing in the middle of a brothel! 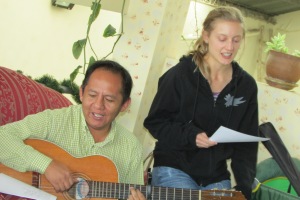 Practicing before we go 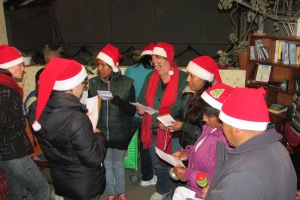 Practicing Christmas Carols to sing in the Brothels of Bolivia

One thought on “Taking Jesus to the Brothels”

Lovely Feet Ministries would love to have you as a partner. Please donate by clicking the donate button at your left, then send us your email address for quarterly newsletters, and we would also love to pray for you. Send your prayer requests to rhonda@lovelyfeet.org. Lovely Feet Ministries is a tax deductible 501(c)(3) organization.